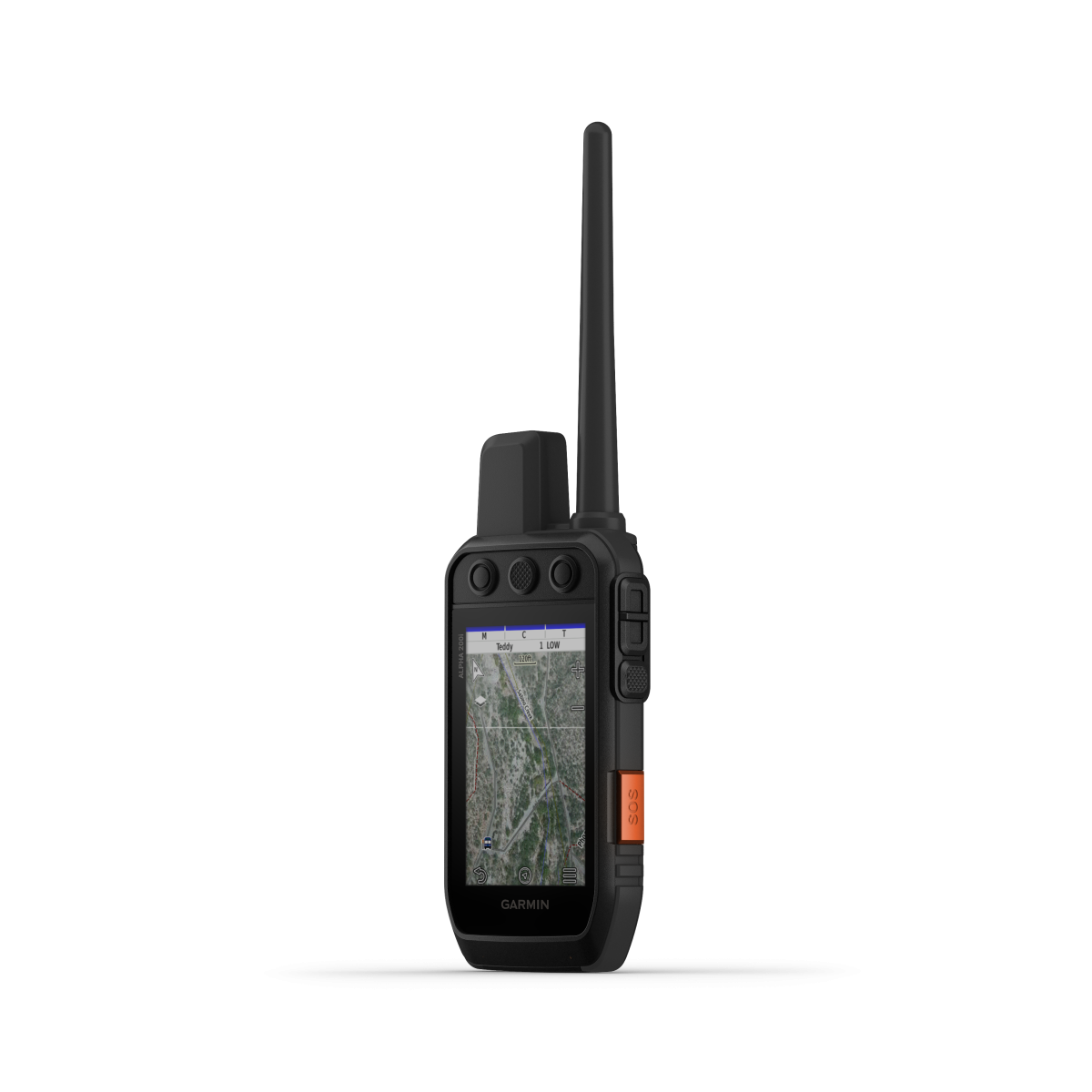 It’s been a long time coming — 8 years to be exact — but it was worth the wait. Garmin has officially added the all-new Alpha 200i to its Track and Train line up.

And no … this isn't an April Fools Joke. We promise.

To be honest, the first time we laid hands on the Alpha 200i was like a kid in a candy shop. Not only does it have all the groundbreaking new features covered in this review, it’s packed full of little gems you never knew you needed but will soon learn you can’t live without.

To ease some minds, as someone hooked on the Alpha 100, we were worried about how painful it would be to switch to the new Garmin Alpha 200i. To our surprise, the learning curve was surprisingly low from the first time holding the unit.

At home, we had zero issues adding collars and prepping for a hunt. That part of the process was very familiar, similar to the Alpha 100. But the true test came using the device in the timber. Using the Alpha 200i never left the user feeling  “lost“ it was a familiar feeling.  We were able to enjoy our hunt without the frustration of learning a completely new system —

If you are easily intimidated by technology, you can rest easy when making the jump to the Alpha 200i handheld will be an easy transition if you’re already familiar with the Alpha 100.

Overall, we feel that the Alpha 200i is more user-friendly than the previous Alpha 100 model. We know everyone has their own ideas on how Garmin could have made the Alpha 100 better, and it seems Garmin really tried to keep an open ear and consider hunters suggestion, when designing the 200i.

Honestly, the Garmin Alpha 200i dog tracking system has far too many small improvements to cover in-depth in just one review, but these are a few that we found both pleasantly surprising and extremely helpful in the field.

So, let’s dig into some of our favorite features of the Garmin Alpha 200i.

We can’t help but talk about this first since it’s what I consider the biggest change and greatest addition to the Alpha lineup of Track and Train systems. As someone who carries an inReach Explorer+ anytime we hit the mountains, we can’t express how excited we are to have a Track and Train system with inreach lifeline all in one package!

Is it a huge deal to pack two separate devices? Not for most. But the first trip back to the truck when you forget to grab your inReach in all the excitement really helps you appreciate this cutting-edge integration.

Using the built-in inReach technology, you can send text messages to cell phones and email addresses when you’re completely out of cell service. Messages are sent via the Iridium satellite network (subscription required) so you can check in with your spouse, kids, the babysitter — whoever — while you’re hunting in the most remote places. You can also choose to add location information and share your tracking with contacts so they can see exactly where you are.

Connecting an Alpha 200i to your smartphone is easy using the Explore App and makes all the inReach features a breeze to use in the field. It’s really not much different than sending normal text messages from your phone.

That said, thanks to the larger touchscreen and integrated QWERTY keyboard, sending messages from the 200i itself is much easier than I expected. The ability to still send and receive inReach messages from the Alpha without a cell phone is also possible.

The biggest piece of mind the added inReach technology brings to the Alpha is the “SOS” button. By triggering an SOS, you can alert Search and Rescue along with other emergency services that you are in need of help. This alert will also send them your updated GPS location during the rescue giving you the peace of mind that help will be there as soon as possible.

If you’re not so sure about the idea of the SOS button, this is not something that can really be accidentally activated, so don’t be afraid or worried about having Search and Rescue coming to track you down because you accidentally pushed a button. The dedicated SOS button is protected by a flip-up cover to prevent accidental presses. When pressed, however, the unit will give an audible tone as well as a countdown timer on the screen with the option to cancel and keep the alert from being sent.

Talk about a great way to merge two awesome products!

Purchase Alpha 200i at DuSupply

(Drumroll playing in the background)

This is it!! The answered prayer to every technically-challenged and computer-illiterate Garmin user out there (we include ourselves sometimes in this statement!) …

For everyone who hates dealing with painful process of Birdseye downloads with Garmin BaseCamp program on your computer, the solution is finally here and it’s called Birdseye Direct.

Since the Garmin Alpha 200i connects directly to WiFi, you can download all your BirdsEye Satellite Imagery directly to your Alpha without using a computer.

We were amazed at how easy the process was to download my imagery. All we needed to do was select the area, push a button, then sip a cup of coffee while the download was completed. It really can’t get much better than that! Just keep in mind that download times will vary depending on your Internet speeds and the size of the BirdsEye file.

Unlike in the past where a paid BirdsEye subscription was required, there’s no subscription fee for using Birdseye Direct on the Alpha 200i and you can download as much imagery as will fit on the device. This is going to be especially helpful for people who hunt multiple states and do not want to purchase a different map for each one.

Now you can download all your favorite areas from coast to coast directly to your handheld.

Though it isn’t a huge jump in size, the screen 3.5” screen of the 200i feels much larger and is easy to read in any conditions — even in blinding sunlight. It doesn’t seem as affected by rain either. The new design also allows you to “pinch-to-zoom” instead of relying on the + and - icons on the map screen. Of course, you can still use the map icons to zoom, but this new functionality just makes using the Alpha 200i seem, for lack of a better term, “natural.”

What Are All these Extra Buttons on the Alpha 200i?

To be honest, the side function buttons took a bit to get used to at first. However once a user’s able to get comfortable with how they work, These extra buttons on the 200i help navigation of training and screen use amazing.

The idea behind the function buttons is to allow users to scroll through the training pages and assigned “hot buttons” without needing to use the touchscreen. Once set up it makes for easy navigation which allows the user to make corrections much faster than the touchscreen only navigation offered with the Alpha 100.

This button-based navigation is going to be a great advantage for those hunting in cold climates or anyone who wears gloves. It’s like the Alpha 200i has a built-in “glove mode.”

With the function buttons, you can change dogs, stimulation type, stimulation levels and even access features like your map, compass, dog list and others without even needing to use the touchscreen.

This is a great addition; however we recommend playing and learning with it a bit to get comfortable, there is a learning curve to having these buttons. We go into much greater detail on how versatile and customizable these buttons are in our Alpha 200i podcast.

This is one of many little jewel’s that someone might not notice at first. Like with previous Garmin tracking models, you will get a “?” icon when you lose GPS or comm with your dog devices. But with the Alpha 200i, you can see exactly how long it has been since the last transmission was received!

The first time we noticed the Last Communication Timer when coming around a ridge to get in front of the dogs and couldn’t figure out what the numbers were next to my dog icon … and then the light came on.

Pros and Cons of the Garmin Alpha 200i

The more we dig into what the Alpha 200i can do, the more we discover how well thought out everything is. But that said, like everything else in life, it isn’t a 100% perfect product and a Double U Review wouldn’t be the same without our list of Con’s.  We feel it’s important we go over both the pro’s and con’s of the Alpha 200i.

This is far from a complete list but I hope gives you an idea of what you might be getting yourself into with the 200i.

Sorry Folks, The Alpha 200i Does NOT have Radar

Last but not least, the Alpha 200i does not have Radar! For those customers who watched our April Fools video in 2014 making a joke about a Alpha 200 product back in 2014, you’ll understand the joke. If you haven’t watched it, check out our fun April Fools video from 2014 and you’ll get the joke. No Radar, no dogs texting you back, or any of the other crazy things we spoofed a video about many years ago!

The Garmin Alpha 200i Release Date is … Now!  Want more information,  Please visit the Links below to purchase or learn more about it.

You can Purchase the Alpha 200i now at Double U Hunting supply!

Purchase Alpha 200i at DuSupply